You are here: Home / News / Vintage hot rods and muscle cars will be on display this weekend at the Iowa State Fairgrounds 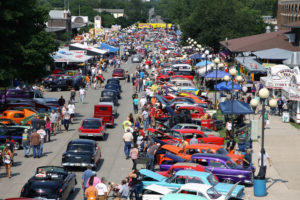 Gleaming chrome, dazzling paint and thundering engines are part of an Independence Day weekend tradition in central Iowa that dates back 26 years.

The Goodguys Speedway Motors Heartland Nationals will be underway Friday through Sunday at the Iowa State Fairgrounds in Des Moines.

Goodguys spokeswoman Betsy Bennett says it’s a showcase for historic, beautiful vehicles. “This event will have about 4,000, maybe up to 4,500 hot rods, customs, classics and muscle cars up through 1972,” Bennett says. “We include the muscle cars as ’73 is about when the gasoline crisis hit and so the ’72s, we bring those full-blown muscle cars into that spectrum.” 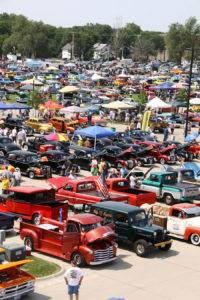 The vehicles are being driven and trucked to Iowa from all across the nation. Attendance for the three-day show may reach 70,000 and for some, Bennett says it’s a history lesson on wheels while for others, a cruise down memory lane.

“When people are at the event, we hear lots of conversations about what they used to drive when they were in high school,” Bennett says. “They may see a car that looks like what they had or it may be the exact car. There’s a lot of history and a lot of stories that go with all of these cars that come into this event.”

One of the big draws of the weekend is the Goodguys AutoCross, a closed performance race course where speed and skill meet in a fastest-car-wins contest.

“It gives them a chance to really test the performance of their car and their driving abilities,” Bennett says. “There’s a lot of really tight turns, there’s a few straightaways where they can get a little speed and then they have to hit the brakes pretty hard. It’s designed for performance and driving skill and you’re racing the clock.” Some of the most famous names in American racing will be taking part in the AutoCross.

“Last year, the two-time Indy 500 winner Al Unser Junior won this event so he will be back in town racing for Team Speedway, as well as Robby Unser who is his cousin, a 9-time Pikes Peak Hill Climb winner,” Bennett says. “Lots of great competition on that race course.”

The weekend events also include a dragster exhibition, a swap meet and cars-for-sale area, arts and crafts, kids’ activities, live music, and fireworks on Saturday night.