You are here: Home / Fires/Accidents/Disasters / Assessment underway after multiple tornadoes touch down 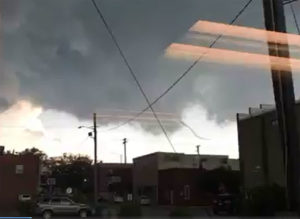 Far southwest Iowa was hit by the first of 8 tornadoes that dropped out of the black clouds onto Iowa soil on Wednesday.

Mike Crecelius, the emergency management coordinator for Fremont County, says he was in Sidney about 3 p.m. when he first saw signs of serious trouble.

“I saw two funnels try to come down at one point, but they both got sucked back up into the cloud itself,” Crecelius says. “The third time, when the funnel started coming down, it just kept coming and it kept itself attached. I could tell it was probably coming down somewhere east of Sidney, I just couldn’t tell where because there’s a hill between us and that.”

Crecelius says he saw two homes north of Farragut that received heavy damage. “Both of them had roof damage,” he says. “The one guy’s got most of his roof missing. A grain bin was blown away at one house. At the other house, the whole house was damaged. Part of his roof is gone. He’s got two of his sheds destroyed. Plus, they had an unattached garage, and had a truck in there. Part of the garage is gone. Both of them have all sorts of trees that were demolished during the storm.”

He says it’s a miracle that no one in the area was hurt, given the amount of damage. “Both houses were occupied,” Crecelius says. “They did get the warning in enough time that in both houses, they went to shelter and nobody was injured in the storm.” Considering the number of funnel clouds and tornado sightings in the county, and the number of photos taken from various vantage points, Crecelius says it’s a wonder the county escaped further destruction.

“I’m not exactly sure how many funnel clouds/tornadoes we actually had here,” he says, “but, we’re pretty lucky there wasn’t more damage done throughout Fremont County and over into Page County than what there was.”  Crecelius asks the public for continued vigilance, as more storm activity is possible this afternoon into this evening.

National Weather Service meteorologist Craig Cogil says survey teams are out this morning to look over the damage to homes, businesses and crops, for the various tornadoes confirmed touching down across Iowa. “Most of them, fortunately, stayed in rural areas and overall produced not a whole lot of damage,” Cogil says. “I think we had one injury reported in the state. For some of the sizes of these tornadoes, we’re very fortunate that nothing worse occurred.”

That one injury was in Prairieburg in Linn County, northeast of Cedar Rapids. The roof of a house collapsed in the twister, trapping a woman inside. It was an exceptionally rough storm that rumbled across Iowa over several hours. “Tornadoes primarily occurred from southwest Iowa down by Bedford, up through near Stuart, near Indianola and then up to the northeast by Dubuque,” Cogil says. “Kind of diagonal from southwest to the northeast corner of the state.”

Tornadoes sometimes occur in groups but it’s uncommon for the state to have at least eight in a single day. “It’s not really a record for the state,” Cogil says. “The daily record is 28 tornadoes set back in April of 2001, so it’s not really close to a record but certainly, that’s plenty for any day.” He warns, conditions appear to be shaping up for a potential repeat this afternoon and tonight.

“It really looks like another day where we will see active weather primarily across the southern half of the state,” Cogil says. “The further south you go, the better threat of seeing severe weather and the potential for damaging winds, large hail and, again, isolated tornadoes.” Keep up with the latest forecast at weather.gov.