You are here: Home / Crime / Courts / DNR gears up for busy holiday weekend on state waterways 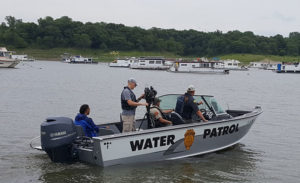 The Iowa DNR will be out looking for drunken boaters during the holiday.

The Fourth of July holiday weekend is typically one of the busiest times of the year on Iowa’s waterways and law enforcement officers are planning to target boaters who’ve been drinking.

Dustin Eighmy is a conservation officer with the Iowa DNR.  This weekend, he’ll be patrolling Saylorville Lake near Des Moines.

“We’re looking for anyone not having the proper lookout, they’re boating too closely to other boaters, they’re speeding through no wake zones, and when we stop them – we’re looking for the slurred speech, watery eyes, the smell of alcohol, and beer cans in there,” Eighmy said.

Iowa DNR officers are ramping up enforcement efforts this weekend as part of the national Operation Dry Water campaign. Susan Stocker, boating law administrator and education coordinator for the Iowa DNR, says the goal is decrease crashes and deaths.

“During 2016, we had a total of 46 boating while intoxicated arrests here in Iowa,” Stocker said. “On a national level, 17 percent of (boating) fatalities involve alcohol, but in Iowa, our rate is 33 percent.” Six people were killed in Iowa in boat crashes last year. Two of those crashes involved alcohol.

In Iowa, it’s illegal to operate a vessel with a blood alcohol level (BAC) of .08 or higher – the same as it is to drive a car. 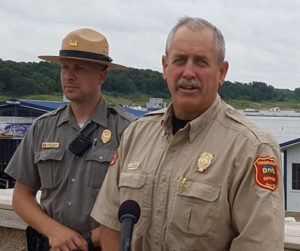 “When you’re on the water, the effects of alcohol get amplified by the wave action, the wind, the sun, dehydration – you don’t realize how much effect you have with that alcohol,” Swearngin said. “We’re looking to take those folks off the water. The folks who are out there drinking, getting drunk and driving their boat around – they’re not just endangering themselves and their families, but other people who are on the water.”

Boating while intoxicated is not only dangerous, Eighmy notes it can also be expensive. “A BWI fine can up to $1,000 and they can lose their boating privileges up to a year,” Eighmy said. “They’re going to spend a night in jail if they go with us. If you refuse, it’s an automatic $500.”