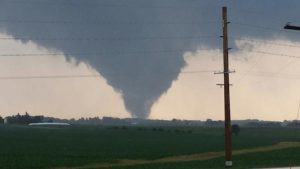 Photo courtesy of KCRG-TV9/Kim Moorman — taken from Highway 13 between Coggon and Central City.

One tornado touched down in southwest Iowa’s Fremont County on Wednesday afternoon, causing scattered damage around Sidney and rural Shenandoah, while a second large twister hit in the east and northeast on Wednesday night, making its way through several counties.

The National Weather Service issued a tornado warning shortly after 6:30 pm based on radar-indicated rotation in Linn County.  Funnel clouds with debris were spotted just south of Central City soon after.

It was opening night at the Linn County Fairgrounds in Central City, with most fairgoers in the grandstands for the fair’s opening program featuring 4-H awards and the queen crowning. Fair Manager Heidi Steffen says they had been keeping an eye on the weather and went into action when the Tornado Warning was issued.

“Our emergency response plan went into play and all our staff and volunteers directed people to the proper storm emergency locations,” Steffen says. “We got everyone in as well as we could. Next thing you know, wind gusts went through. No one really saw a tornado hit or touch down. It was really windy but after everything passed, you could see the funnel cloud off in the distance.”

Steffen says the Linn County Fairgrounds did sustain some damage but “nothing major.” 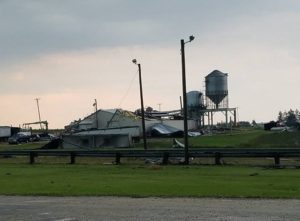 Moments after the funnel clouds were spotted, a large tornado was confirmed on the ground heading into Prairieburg. The Prairieburg Fire Department reported the tornado traveled through Prairieburg, tipping over semis and taking down houses, garages and grain bins.

Linn County Emergency Management reported that one person was injured in Prairieburg. They say the person was trapped inside their destroyed home. From there, the tornado headed northeast, making its way into northern Jones and southern Delaware counties.

Steve Turnis, who lives near Sand Springs, says the tornado caused destruction at the home of his neighbor, Jeanette Freese.

“Just south about a half mile, it took a house and a barn and I don’t know what all else is gone,” Turnis says. He says Freese was not home when the tornado hit.

The tornado was also reported on the ground just north of Cascade. No other damage reports have come in at this time. The Linn County Fair says all events will go on as planned Thursday, though some events may have to be moved to a different location on the fairgrounds. Another round of severe weather is possible Thursday afternoon and evening.