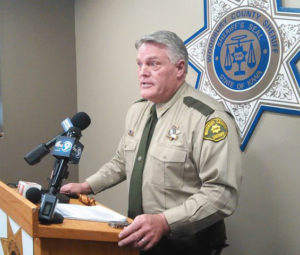 A northwest Iowa sheriff says he’d rather be in conflict with the county’s board of supervisors than be held in contempt by the court.

Last week, the chief justice of the Iowa Supreme Court issued an order barring guns in the courthouses in Iowa’s 99 counties. On Tuesday, Woodbury County’s Board of Supervisors voted to lift the ban on guns in the Sioux City courthouse that’s been in effect since 2014 — although guns would still be barred in the building’s courtrooms.

A new state law that goes into effect this Saturday lets people sue local governments over weapons restrictions. Woodbury County Sheriff Dave Drew is in charge of security for the courthouse and he plans to abide by last week’s order from the chief justice.

“It was a clear direction from the Iowa Supreme Court,” Drew says.

Drew is “disappointed” In the board of supervisor’s decision.

The sheriff says he thought supervisors were hoping for an attorney general’s opinion, but got direction from the Iowa Supreme Court instead. Drew has written the supervisors in Woodbury County and told them he feels “compelled to follow” the Supreme Court’s order.