You are here: Home / News / Governor: Iowa ‘lucky’ there were no deaths from eight tornadoes 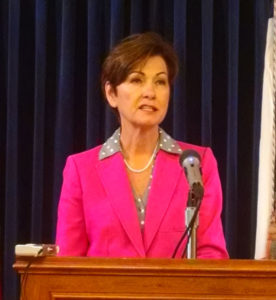 Governor Kim Reynolds toured tornado damage in the Knoxville area late this morning and met a man whose parents lived through a tornado nine years ago.

Blaine Kussatz said that’s why his daughter was a bit “spooked” by the storm. “It was pretty traumatic because my mom and dad were actually in the Parkersburg tornado,” Kussatz said. “She was about five when that happened, so she kind of remembers a little bit of that. She remembers the aftermath.”

Seven people died in 2008 when a powerful tornado damaged or destroyed more than three-hundred homes and businesses in Parkersburg. No one was hurt in this past Wednesday’s tornado that ripped a narrow, 15-mile path through Marion County. The Kussatz family was inside their home in rural Knoxville, watching the rain storm, when a cell phone sounded the alert that a tornado was nearby.

“Looked like it was going to go south of us and then all of a sudden it turned,” Blaine Kussatz said. “And it’s like: ‘Oh, boy!'”

The family took shelter in their basement.

“We really didn’t think much of it until we walked out of the basement,” he said. “We just thought it was high winds and walked out and it was a little more than high winds.”

His house is still standing, but the roof and gutters were damaged, plus dozens of trees were leveled on the property.

“I’ve got my winter planned,” he said. “…I’ve got enough firewood for a few years now.”

Governor Reynolds told reporters it’s amazing no one was hurt given the extent of the devastation she saw today. Governor Reynolds praised road workers, utility crews and “hundreds” of volunteers for their quick response.

“Just a whole lot of people working together to get people’s lives back in order,” she said.

One horse was hurt by the tornado that struck in Marion County, but Reynolds indicated the animal is expected to live. And the governor said some of the crops around Knoxville that were flatted Wednesday seem to be popping back up today.

“It’s not good, so I don’t want to minimize the damage that’s been done, but it could have been even worse,” Reynolds said. “We had a lot of tornadoes happening and hitting down across the state, so we’ve been lucky statewide, really, there was no fatalities at all.”

The National Weather Service confirmed eight tornadoes touched down in Iowa on Wednesday.