You are here: Home / Agriculture / Storms in western Iowa do some damage to crops 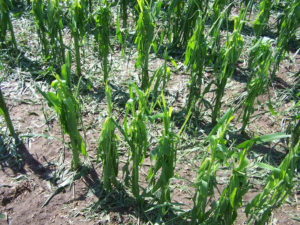 “It severely damaged our bean crop and our corn crop. Apparently there was a lot of wind and a lot of sharp hail,” Krosch says. He says they saw quarter to dime-sized hail at his home and he heard others got golfball-sized hail. “It stripped the corn up pretty bad and just left kind of stems.” He says there are reports of hail all over the area.

“I heard a lot of reports up by Highway three as big as softball and baseball-size hail, as well as golfball-size hail,” Krosch says. He says along one stretch of the county road the hail hit across an area that is three miles wide. Although his crops sustained major hail damage, Krosch doesn’t believed they 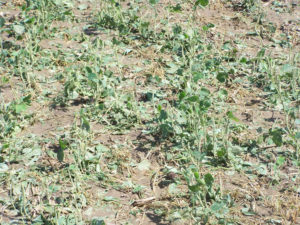 “I wouldn’t say totaled at this point in time — I mean they do look really bad — the beans by far look worse. I’ve had before and I know what is going to happen with the corn,” Krosch says. “The corn is all tangled up and mangled up, we definitely can’t replant this late in the game, but I think we’ll definitely get some corn out of it yet. There’s definitely going to be a lot of disease pressure out there.” He says if the corn survives the disease threats, it’s still not know how far it will develop.

“How much that tassle and the ear is going to come out, I don’t know at this point in time,” Krosch says. Farmers within the hail-damaged area plan to meet with Iowa State University Extension and Outreach Crops Specialist today to determine their available options.