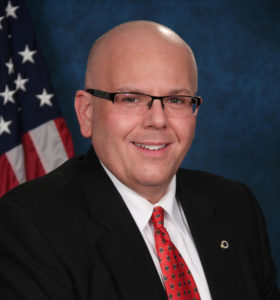 A member of the Boone City Council for more than 13 years is challenging Kim Reynolds in the 2018 Republican Primary for governor. Forty-six-year-old Steven Ray has worked in Iowa law enforcement since he was 17.

“I just see a lot of things in government, working in government every day, that I really think need a serious makeover,” Ray said during an interview with Radio Iowa.

Ray put himself through college working as a dispatcher for the Boone County Sheriff and he currently oversees Iowa State Patrol communications centers in Cedar Falls, Cedar Rapids and Des Moines. Ray’s grandfather was the long-time sheriff of Story County.

“I was involved in his campaigns as a young person, been involved in a number of campaigns over the years,” Ray said. “…This is not a decision to run for governor that just popped up overnight. This is something that I’ve been working on probably well over two years, quietly in the background.”

Ray has been a state employee since 1995. Ray said he would have vetoed the bill former Republican Governor Terry Branstad approved in February that drastically reduced collective bargaining rights for government workers.

“Just to say that: ‘Public employees are a drain on our budget and we’ve got to have smaller government and smaller government means less employees,’ o.k. If that’s the route you want to go, that is fine,” Ray said. “But I can tell you there are essential functions out there from health and human services to public safety that are not getting filled. We have a lot of people that are working hard, working tremendous amounts of overtime, being overtired. They’re just not getting the recognition that they need.”

Ray’s private email address uses the moniker potus2024, a reference to the presidential campaign that starts in about seven years.

“I’ve had that email for probably 20 years. Kind of funny when I was on my Facebook page…a lot of people there I went to school with and they all said: ‘You know, everybody said he was going to be president,’ and I said: ‘Well, one ting at a time,'” Ray said, with a laugh. “That’s a lofty goal. Many people try, but few get there. Do I think I could be a good president? Absolutely. I really think I do and I think I’d be a good governor first for the people of Iowa, I really do, so that’s my concentration now.”

Ray filed the paperwork last week and he’s an official candidate for governor. Ray is planning to hold a rally in Boone in late August to formally kick off his campaign. Ray is joining Cedar Rapids Mayor Ron Corbett in challenging Governor Kim Reynolds’ bid for a four-year term as governor.