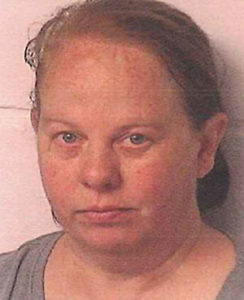 A Union County woman was arrested on three counts of arson Sunday night after allegedly trying to burn down a house in Creston that she wanted condemned.

Creston Police arrested 42-year old Sheila Renae Shoults on three counts of arson following an investigation into a blaze at 805 ½ Jefferson Street in Creston. When firefighters arrived just before 8 p.m. Sunday, the house was in a state of a fully developed fire with flames breaching the interior.

Officials say this was the fourth time the home had caught fire and other attempts indicated the cause was intentional. A camera had been placed in the house to capture any illegal activity within the residence, and was successfully removed. The images downloaded showed the suspect, Shoults, who was located and asked to come in for questioning.

She agreed to do so and after being read her rights, confessed to setting the blaze. She stated that she was tired of all the strange people coming and going in and out of the home. She was also concerned as children would enter the home as well. Shoults had taken steps to have the house condemned, but she said the process was taking too long. She also confessed to three other cases where the house was set on fire.

Shoults was arrested at the Union County Law Enforcement Center at around 11:30 p.m. Sunday and was being held for Union County in the Ringgold County Jail while awaiting a bond hearing.