You are here: Home / News / Reynolds plans to wait on special session decision 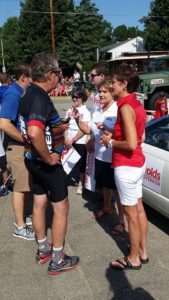 Governor Kim Reynolds says she’ll wait until later this fall to decide if she needs to call legislators back to Des Moines to deal with the state budget. A Legislative Services Agency report released Monday indicates state tax collections during the past 12 months were below expectations by more than $104 million.

Reynolds says there’s a lot of number crunching going on and she’ll wait until the end of September before making any decisions about a special session. “You know, there are different numbers, so we’re continuing to work on that. We’re watching it every day and we won’t know for sure until September 30. We’re hopeful that we can get it below $50 million, then I can just transfer from the Economic Emergency Cash Reserve, but if not, we would be required to call a special session,” Reynolds said.

The governor has the authority to transfer up to $50 million from the state’s Economic Emergency Fund to cover a deficit. By the end of September, when all the calculations are completed – if the deficit is larger than $50 million, the governor will be forced to call a special session.

Reynolds said she’ll do everything possible not to call legislators back to Des Moines to deal with a budget issue. “I’d prefer not to, I mean, we hope we’ll be able to keep it under $50 million. But if we have to, we have to. What we’re focused on is turning this economy around and getting it growing again,” Reynolds said.

According to Reynolds, the Revenue Estimating Conference has had a tough job in the last couple of years projecting what will happen with the state’s finances. “They’re continually looking at (the financial situation) with the Department of Revenue. Every time they feel like they find it, there’s some other anomaly that pops out, so every day are continuing to look at how we can better forecast that, but it’s 18 months out. With this economy the way it’s been…and it’s just not because of agriculture. It’s the purchasing habits of Iowans, they’re going online. So it’s a combination of things,” Reynolds said.

The bottom line, Reynolds added, is when the agricultural community stumbles financially, it has a great impact on the Iowa economy. “It’s not the only factor, but it certainly plays a role in what we’re seeing,” Reynolds said. “When farmers aren’t making money, they don’t purchase the way they typically do. Even Casey’s (General Store) is feeling the repercussions of a stumbling ag economy.”

Reynolds made her comments today before participating in the Fourth of July parade in Clear Lake.