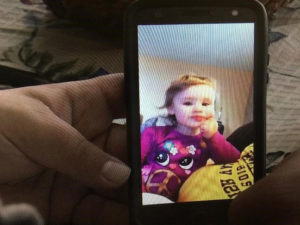 Chris Loffer holds a phone with a photo of his daughter Bella.

A Cedar Rapids man says his two-and-a-half-year-old daughter is the victim in a Williamsburg murder case.

On Monday, police in Williamsburg charged 29-year-old Cody Stevenson with first-degree murder, only identifying the victim as a child not related to Stevenson.

Chris Loffer told KCRG-TV it was his daughter, Bella, who died Monday. Loffer separated from the girl’s mother last October and hadn’t seen his daughter since January due to visitation issues.

He went to University of Iowa Hospitals on Monday after learning Bella was in intensive care. “I found my baby girl with tubes and…just lifeless. It wasn’t Bella, it wasn’t my little girl,” Loffer told KCRG. A nurse at the hospital told Loffer there were strong suspicions of child abuse and police were involved.

“She said she wasn’t at home and didn’t suspect anything. I don’t know, I wasn’t there,” Loffer said. “I don’t know what was going on in the home.” Williamsburg Police, in announcing Stevenson’s arrest Monday evening, did not provide many other details about the case.