You are here: Home / Agriculture / Iowa State University to continue study on how prairie plants can help honeybees 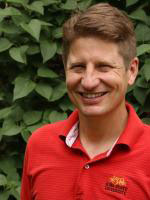 Researchers at Iowa State University have received a one million dollar grant to study if prairie plants can help fill a food gap for honeybees.

ISU’s Matthew O’Neal says the grant helps them continue research they’ve already done on helping the bees. “Over the last couple of years we’ve been doing a study looking at

what factors are affecting honeybee health and if there was enough forage for them in an landscape like Iowa’s where we grow a lot of corn and soybeans,” O’Neal says. He says the starting researching after noticing that honeybee hives lost weight in the fall.

“From about June until the first week of August, honeybee hives would gain weight. But over the course of a two-year study, they lost week starting in the first week of August,” O’Neal says. “And that’s really early given that they have to eat the food that they make from foraging on flowers to get through the winter.” O’Neal is an associate professor or entomology, and says they found prairie plants might provide the fall food the bees need.

“We showed the U.S.D.A. in a very preliminary study that if we moved hives from soybean fields to prairie — not only did their weight loss stop — but they gained weight,” O’Neal explains. The now want to take a longer look to see if prairies are a viable solution to help the honeybees.

“The focus of our next study is to see just how much weight they can gain — and if that weight gain can help them survive other sources of stress — like exposure to insecticides that they might get in crop fields like soybeans where farmers may need to spray insecticides,” O’Neal says. He says the prairies are available at the right time.

“And what makes prairie really remarkable is that it has a variety of native plants that produce flowers into the late summer, even into the fall. And that can be a source of forage for honeybees,” O’Neal says. He says the honeybees forage for pollen, but their main food source is nectar in plants.

“In our preliminary work we’ve seen that they can find them easily in the prairie, and they find them attractive. and it can be a source of weight gain in the form of nectar that they can convert to honey,” O’Neal says. Beekeepers have used clover as a primary source of forage for honey bees, and very few are believed to have used prairie flowers as a substitute.