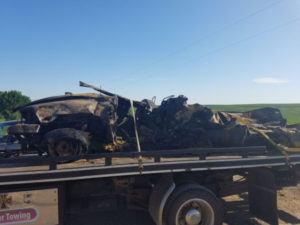 A Le Mars man died after his pickup struck a grain trailer and caught fire.

The Sioux County Sheriff’s Department says a Le Mars man died in an accident Wednesday afternoon at a rural intersection about three miles south of Maurice.

Fifty-four-year-old Mark Grosenheider was driving a pickup truck when it struck a semi truck pulling a grain trailer fully loaded with feed. The pickup became wedged underneath the grain trailer and was drug for several hundred feet, and then ignited on fire.

Grosenheider was trapped inside the vehicle and died at the scene. The driver of the semi, 61-year-old Michael Alons of Sheldon suffered only minor injuries.