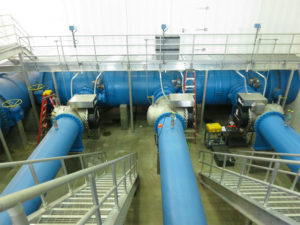 The annual report from the state Public Drinking Water Program shows only a small percentage of public drinking water supplies are failing to meet all the federal quality standards.

Moles says operators are good about reacting quickly to issues. “When a problem is found — no matter what they’re looking for — we’ve got a lot of good operators in the state. And they are diligent about getting these fixed,” Moles says. “And we’re also as a state program with oversight, we’re ensuring that they are getting them fixed. So, it’s sort of a collaborative effort, when problems are found, they get them taken care of .” 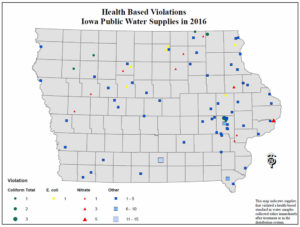 Mole says the numbers this year were boosted a bit by a change that no longer makes the discovery of coliform bacteria in a system and automatic violation. She says operators are now allowed to do a check of their whole system to find the source of the problem.

The report says the coliform bacteria are not harmful in themselves, but indicate a pathway into the water system through the pipes or some other avenue. That is why the system operators are now given the opportunity to check for the problem and correct it before it becomes a bigger issue.

Iowa did not have a disease outbreak or death linked to water from a public system. Moles says she has never seen that in Iowa in her time here. She says she’s been in the program for 21 years and says in that time there have been other cases of people dying from contaminated water systems in other states such as Illinois and Missouri.

“There’s some famous ones in Missouri where birds go in water towers and caused some salmonella outbreaks and people did die from that,” Moles says.  A public water system is one that serves at least 25 people, and there are nearly three million (2.93) people who get their water from those systems in Iowa.

Moles says those who are served by a public water system should soon see a report on that system sent out by the system. She says it’s important information. “People need to know what’s in their water — that’s part of the reason for this consumer confidence report — so that people know what’s in their specific water. They know who their water supplier is,” Moles says. “There’s a requirement in there for them to know when their board meetings are held, however the governing structure is in that system and who they can contact if they need more information. All of that kind of stuff is in there, it’s actually a very good report.”