You are here: Home / News / Music set to get underway for 10th edition of 80-35 Music Festival 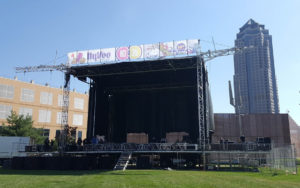 Main stage for the 80-35 Music Festival.

A music festival named for the two interstates that meet in Iowa’s capital city opens later this afternoon.

This marks the 10th year for the 80-35 Music Festival in downtown Des Moines and organizers say they’re somewhat surprised the event has survived a decade. Justin Schoen is a founding board member of the Des Moines Music Coalition, which runs 80-35.

“The second year, we faced some challenges with weather and weaker ticket sales. After that year, there was the real possibility that the festival might not continue,” Schoen said. “We were fortunate that the community and some private individuals stepped up and helped cover some of the funding gaps for the next year until we were able to build back up the financial stability we needed to continue.”

More than 600 volunteers make the two-day event possible. According to Schoen, that “community support” is what sets 80-35 apart from other music fests. “To our knowledge, we’re one of the largest volunteer-run music festivals in the entire country,” Schoen said.