You are here: Home / News / Sasse is ‘hot’ over GOP’s approach to ‘repeal and replace’ of ObamaCare (AUDIO) 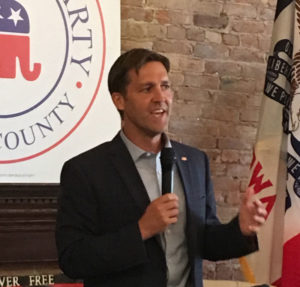 First-term Nebraska Senator Ben Sasse spoke to a crowd of about 200 Republicans in Nevada tonight, presenting himself as a “newbie” politician, who’s “frustrated” by the GOP’s current stalemate over health care.

“For seven years, this party has been for the repeal and replace of ObamaCare,” Sasse said. “The president just ran and won on it. There are 52 Republicans in the Senate. Fifty-one of us have pledged to repeal ObamaCare.”

And Sasse questioned why the Republican leader in the U.S. Senate would even suggest striking a deal with Democrats rather than come up with a Republican plan. 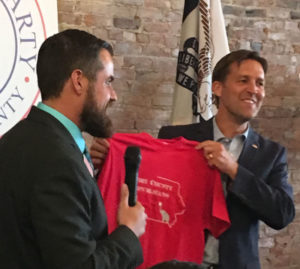 Story County Republicans give Nebraska Senator Ben Sasse a shirt he says is the right color.

“I acknowledge it is really hard to do that, to get to agreement on what a replace plan looks like,” Sasse said. “What wouuld a rational person who’s made a bunch of pledges do? You’d say: ‘Well, maybe we ought to separate these steps. Maybe we ought to keep our word on repeal.'”

Sasse said after passing a bill that repeals ObamaCare this month, congress should skip its August recess and work on a replacement “full time.”

“And we ought to not leave DC until we finish the work,” Sasse said, to applause.

There was heightened attention to Sasse’s appearance at the Story County Republican Party’s fundraiser after the Iowa GOP’s chairman said at a recent Trump rally in Cedar Rapids that Sasse should “stay on his side of the Missouri River” if he planned to criticize President Trump.

“Jeff Kaufmann called me the next day to make sure I wasn’t mad at him,” Ortiz said, with a smile. “And I told him: ‘Heck no…It’s all good.'”

Sasse did not mention the name “Donald Trump” during his 55 minute appearance and the audience didn’t press Sasse on his past Trump critiques. Jim Frevert has lived in Nevada for 53 years and he said Trump is popular in the community.

“He’s doing his own thing,” Frevert said. “And he’s getting things done.”

Sasse, who is sometimes listed in national media as a possible 2020 primary challenger of President Trump, was asked by a woman in the crowd why he was in Iowa, not Nebraska tonight. Sasse said his kids are participating in a triathlon in Des Moines on Saturday and that’s the main reason, plus he’s honoring a lost bet over the Nebraska-Iowa football game. Sasse is a Uber driver in Des Moines tonight — and he’ll be wearing Hawkeye gear while doing it.