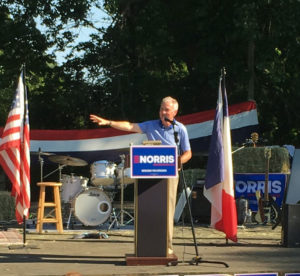 John Norris, a long-time mechanic for Democratic campaigns in Iowa, formally kicked off his campaign for governor this weekend.

Norris held an event Saturday evening on the farm near Red Oak where he grew up, then about 200 supporters gathered for a potluck picnic at Living History Farms late this afternoon. Norris spoke for about 25 minutes, outling his priorities. He supports limits on campaign donations, greater spending on public schools and a focus on economic develpment incentives that benefit all businesses rather than big tax breaks for just a few.

“Our politics are incredibly toxic, the government we have is sick and our future is seriously eroding and that’s why I’ve chosen here today amongst all of you to announce my candidacy,” Norris said, to applause and cheers.

“How can we expect the children of Iowa to want to stay in Iowa when you can’t drink the water and you can’t swim in the rivers and the lakes?” Norris asked, to applause. “We have to insist that those who are treating our water and our natural resources irresponsibly are stopped.”

Norris ran the Iowa Farm Unity Coalition in the 1980s and opened a restaurant in Greenfield. He argued it’s time to “reconnect” urban and rural Iowa and Norris says it’s time to ensure rural schools are “exceptional” and broadband access is universal.

“I think we have opportunities there, but it takes a governor and a government that knows they exist, first of all, enough to recognize the opportunities and the incredible quality of life for people who want to live in rural Iowa,” Norris said, “and I think more people want to.”

Norris ran Jesse Jackson’s fourth-place Iowa Caucus campaign in 1988 and John Kerry’s successful campaign here in 2004. Norris also helped steer Tom Vilsack’s successful campaign for governor in 1998. Norris served in three different roles in the Obama Administration, first as a top aide to Vilsack in the USDA, then as a federal utility regulator and finally as head of the USDA’s Foreign Agriculture Service, based in Rome.

More than a handful of other Democrats are either running or mulling a run for their party’s next nomination for governor.