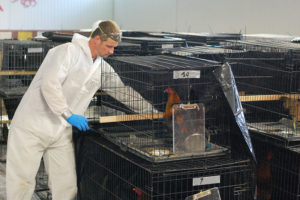 A rooster taken from an alleged cockfighting ring in Des Moines.

A Des Moines man is accused of running an illegal cockfighting operation on the east side of the city.

Animal Rescue League of Iowa executive director, Tom Colvin, says they helped police remove 85 hens and roosters from the property. Colvin says there were signs that cockfighting was taking place. “One of the things that we were looking at is paraphernalia which is associated with cockfighting,” Colvin explains.

Colvin says the birds don’t appear to have any problems, they look pretty healthy, there are just a lot of them, which was also a code violation as you are nly able to keep 25 birds.

Mariano Martinez Ramirez has been charged with felony animal contest, possession of contest device (animal fighting paraphernalia), having an excessive number of animals, and violation of probation.

Colvin can’t say how prevalent cockfighting might be in the state. “Well, that’s a good question actually because we don’t know. We don’t run into this every day — which is good,” Colvin says. “However, if people aren’t aware of what this is, they maybe stumble across it and see it and didn’t know that you could report. It is a felony in the state of Iowa and the Animal Rescue League did push to get a felony here in the state.” He says if you notice a lot of activity somewhere and noises from roosters, it could be cockfighting.

Colvin says it is important to report suspicious activity that could be cockfighting.

“It is illegal, it is barbaric. If anybody has seen footage..it is pretty barbaric, it is where two roosters fight each other to the death,”Colvin says.

Colvin says they will eventually put the chickens up for adoption.

Photo courtesy of the ARL of Iowa.