You are here: Home / Human Interest / Instruments from the U-I will help with inspection of Jupiter’s Great Red Spot (audio) 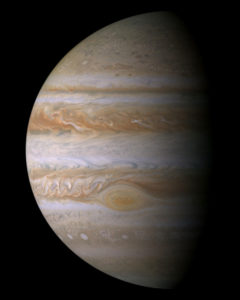 The most distinctive feature of the largest planet in our solar system will get its first close-up inspection by a NASA spacecraft later today with instruments onboard built at the University of Iowa.

“It was possibly observed by Giovanni Cassini as early as 1665, that’s over 350 years ago, although it’s been continuously observed for more than 180 years,” Kurth says. “It’s about 10,000 miles wide. That means we could fit two or three Earths in it.” So how is a single massive storm able to keep churning for centuries?

“That’s something that we don’t know and it’s one reason for the existence of the Juno mission,” Kurth says, “to learn about Jupiter and how it works so that we know more about the workings of the solar system and storm systems on Earth.” After a nearly-five-year journey, the spacecraft Juno safely arrived in orbit over Jupiter almost a year ago.

Its eight major instruments will all be switched on for its first “close” pass over the super-storm tonight — about 9 P.M. Central time. “Close” in celestial terms means Juno will be soaring about 22-hundred miles above the planet’s atmosphere.

“We will be able to peer into the storm to see just how deeply it’s rooted in Jupiter’s atmosphere,” Kurth says. “Until now, we’ve basically relied on images of the cloud tops.” The UI’s instrument onboard Juno is called Waves and it will be analyzing low-frequency radio waves being emitted by the solar system’s oldest and most famous storm.

“We’ll be looking, as we pass over the Great Red Spot, for radio emissions we call ‘whistlers’ that are associated with lightning,” Kurth says. “We’ll be curious to see whether there’s lightning coming from the Great Red Spot or around it.” Many questions remain about the spot and about Jupiter itself, like whether there’s actually a planet under all of those clouds or if it’s just an enormous ball of gases. Kurth hopes to start unlocking some of those mysteries tonight.