You are here: Home / News / Japanese beetles take a toll on plants in some areas of Iowa 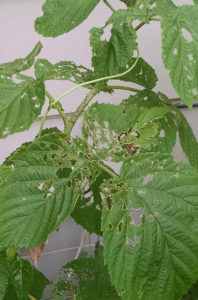 Damage to raspberry leaves from a Japanese beetle.

Some homeowners are worried after seeing leaves being stripped from trees and plants by Japanese beetles, but an Iowa State University horticulturist says there’s not a lot that can be done.

Extension horticulturist, Richard Jauron, says the conditions were right and the beetles apparently came out a little early this year. He says it doesn’t appear to be a statewide issue.

“Some areas have huge numbers while other areas have just a few. So, it really kind of depends, it’s more spotty than widespread,” Jauron says. He says you may see more Japanese beetles in your yard because you have some of their favorite trees and plants to munch on.

Linden trees for example, are a favorite. “If you have a linden tree — and if you have a large population in your area — there’ll be thousands in that tree feeding on the foliage. So, it really kind of depends on the area and the tree.” Jauron explains. “Some plants they love. They like grape vines, they like roses, they like raspberries, they like birch trees.”

There are other trees and plants that they don’t care to eat. “Like maples, oaks, lilacs vibernums. It really kind of depends on the plant,” Jauron says, “so if you have plants in your yard that they really don’t like, you may not see that many.” The bugs have a green metallic head with copper-colored wing covers. Jauron says there’s not a good way to get rid of the Japanese beetles once they decide to make your tree their meal. 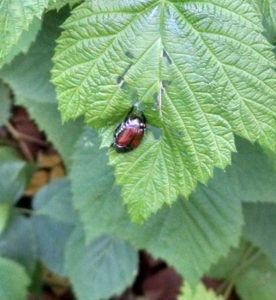 “We would typically suggest just to ignore it if you can. And that’s because even though they may eat most of the foliage and essentially defoliate the tree — they are not going to kill it– and that’s the bottom line,” Jauron says. “And trying to control them at this point, it’s basically impossible.”

There are some plastic traps you can buy that will catch the Japanese beetles, but Jauron says they may do more harm than good by attracting more beetles to your area.

“So if you have a trap in the yard, you may actually have more in the yard than you would otherwise. So, we typically don’t recommend their use,” according to Jauron.

Jauron says the Japanese beetles will stick around until the end of July or early August. If you had a bad beetle infestation this year, that doesn’t necessarily mean they’ll return again next year.  Jauron says weather conditions dictate their population, as cold weather can kill off the grubs in the ground that emerge as beetles.