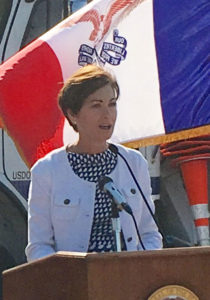 Governor Kim Reynolds says she has an “obligation” to balance the new state budget and some state worker layoffs may be necessary.

“I think they’ll be minimal, so I’ve not had many that have come to our desk,” Reynolds says. “I think the message that we want to really portray is that services have not been impacted so far. That is what each one of our directors are doing, really, the best job that they can to manage a very tight budget.”

The state’s new budgeting year began July 1. Last week, seven workers in the Department of Natural Resources laid off as managers reorganized the agency to deal with a budget cut.

“Even with the recent layoff at DNR, no services were impacted,” Reynolds says. “And every single day we should be looking at our agencies and looking for ways that we can provide a more efficient and effective service to Iowa, by really being mindful of the taxpayer dollars that are funding state government.”

Reynolds says state agency directors are aiming to “minimize” the need for layoffs.

“I want to also though take this opportunity to complement our state workers that do a phenomenal job every single day,” Reynolds says. “They are the face of Iowa government and they are on the ground, delivering services, and we’re very appreciative.”

Reynolds plans to wait until late September before deciding whether to call legislators back in special session. Reynolds has the authority to withdraw up to 50 million dollars from the state’s Economic Emergency Fund to cover any shortfall in last year’s state budget. The full extent of the deficit won’t be known until all accounts are settled September 30.