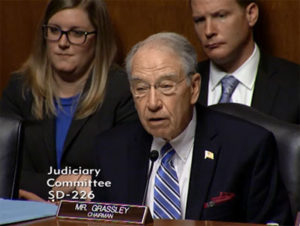 Grassley chairs the Senate Judiciary Committee, which is holding a nomination hearing on Wray. He questioned Wray about how he would run the nation’s top law enforcement agency.

“What is your view on the independence of the FBI generally, but more importantly on you as director as you head up that organization?,” Grassley asked. Wray responded. “I believe to my core that there is only one right way to do this job. And that is with strict independence, by the book, playing it straight

faithful to the Constitution, faithful to our laws and faithful to the best practices of the institution,” Wray says. “Without fear, without favoritism and certainly without regard to any partisan political influence.” Wray says that is the commitment he would make if he is confirmed for the job.

“And I would just say that anybody who thinks that I would be pulling punches as the FBI director, sure doesn’t know me very well.” Grassley also questioned Wray on one of the top issues the senator has pursued in oversight of the organization.

“How will you protect whistleblowers in the FBI and hold retaliators accountable? Not just with your words, but with your actions?,” Grassley asked. Wray told the Senator his reputation of looking out for whistleblowers is well known. “I would say first off, retaliation against whistleblowers is just wrong, period,” according to Wray. “I’m obviously not familiar yet with the bureau’s internal processes, but there needs to be a process for appropriate concerns to be raised.”

Wray told Grassley that he has found whistleblowers can play a very important role in accountability in an organization. Wray was nominated by President Donald Trump to replace fired FBI chief James Comey. Wray was an assistant attorney general in the George W. Bush administration. He then went into private practice and represented New Jersey Governor Chris Christie in the Bridgegate scandal.