You are here: Home / Agriculture / Chinese group visits Iowa on a buying trip for soybeans 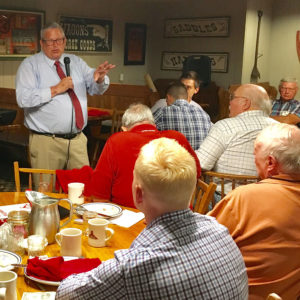 A delegation from China is scheduled to sign an agreement in Iowa today to buy another big batch of American-grown soybeans.

“So that’s somewhere north of $10 billion worth of soybeans already this year,” Northey says.

Northey, Governor Reynolds and other commodity group leaders from Iowa will meet the Chinese delegation in downtown Des Moines at 9 a.m. this morning. A midday ceremony is planned to formalize China’s latest purchase of U.S. soybeans.

“It’s their way of reminding everybody that they’re going to buy lots of beans and a lot of people don’t even realize it happens,” Northey says.

About half of the soybeans harvested in Iowa last year were exported to foreign buyers and Northey says 60 to 70 percent of those exports went to the Chinese.

“Twenty years ago China was either a net exporter or no an importer at all. Now they buy two-thirds of all the soybeans that are traded in the world,” Northey says. “Not just ours, but South American beans as well.”

Northey says the Chinese process soybeans just like we do. The beans are crushed. The oil is taken out and the soybean meal that’s left is incorporated in livestock feed.

Northey made his comments during an appearance Wednesday morning at the Westside Conservative Club in Urbandale.