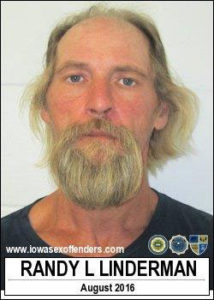 Authorities today made an arrest in connection with a Newton man’s death four months ago.

Fifty-two-year-old Randy Linderman of Charles City was arrested and charged with first degree murder. Luis Ramirez Berber was found dead inside his home in rural Jasper County on March 6th. An autopsy revealed he died of “blunt force trauma.”

Authorities haven’t said what the connection between the two men may be or what led them to arrest Linderman. Linderman has a criminal record and is listed on the state’s sex offender registry.

Linderman has a handful of previous felony convictions. He was arrested in late 2015 for allegedly stealing copper and other metals. In 2001, he was convicted of third degree sexual abuse. His victim was an adult female.

Lindeman was doing time in the state prison in Fort Dodge in 2008 when his sentence was extended by five months and he was placed in isolation for 180 days after a confrontation with a guard. A state ombudsman’s report about that incident concluded the prison’s discipline for Linderman had been “neither fair nor impartial.” Prison officials accused the ombudsman’s office of issuing a “factually inaccurate” report.