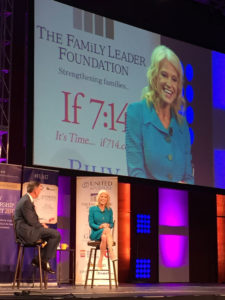 About a thousand evangelical Christians gathered for the Family Leadership Summit. Late this morning, Kellyanne Conway, a senior counselor to President Trump, asked the crowd to “pray for the mockers” in the media.

“As the person in the West Wing who does not say: ‘fake news, enemy of the people, opposition party’…my grievance is not biased coverage, it’s incomplete coverage,” Conway said. “Biased coverage people can see for themselves…I think part of becoming civil is making sure people are connected with the relevant information that they need and they deserve.” 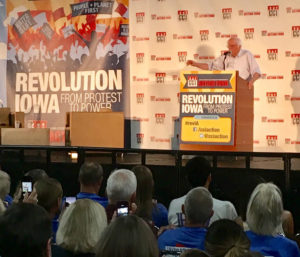 About three hours later, Vermont Senator Bernie Sanders addressed about 1,100 gathered at the annual convention for the Iowa Citizens for Community Improvement Action Fund. Sanders also criticized the media, but for a lack of “progressive voices.”

“People are paralyzed,” Sanders said. “…People don’t think their voices matter and your job, in and every way you can, is to bring people together, raise issues that other people are not talking about, force discussion and create the kind of vibrant democracy that we need to see.”

Sanders is the independent who nearly tied with Hillary Clinton in the Iowa Democratic Party’s 2016 Caucuses. Sanders urged the crowd in Des Moines today “not to fall for the bait” that divides American against American.

“Don’t believe everything you see on the TV. Yeah, you can get pretty depressed,” Sanders said. “…Of course there are racists and sexists and homophobes. You’re going to see ’em on TV every night, but they are not the majority of the American people.”

As Conway stepped on stage at the Family Leadership Summit, she immediately mentioned Trump’s “nine and a half point’ victory in Iowa last November and told the crowd Trump is “keeping faith with people of faith.”

That message resonates with people like Curt McNew of Cresco. McNew said it seems to him that more people are engaged in politics these days.

“Some for good reasons and some for not,” McNew said during an interview this morning. “The Trump Administration shakes things up. A lot of it’s for the good and I think he also arouses a lot of snakes out of the swamp.”

Conway also lamented the tone employed by her critics.

“If they’re going to criticize policy, that’s terrific,” Conway said. “But criticizing, I mean, how I look or what I wear or how I speak — it’s really remarkable and it totally undercuts modern feminism.”

Conway didn’t give a speech at the event. She was interviewed by The Family Leader president Bob Vander Plaats. Vander Plaats told reporters his goal for the day was to focus on “a message of civility” and to “raise the bar” in the midst of the maelstrom in the media and on social platforms like Twitter.

From the stage, Vander Plaats urged the crowd to “put principle over politics” and to greet “friends and neighbors” in the same building at a convention featuring Sanders with respect rather than scorn.

“It’s two different world views,” Vander Plaats told reporters shortly before his event began, “but yet we can co-exist together.”

Paula Friend of Des Moines said during an interview early this morning that came to the Family Leadership Summit “with an open mind.”

“I prepared by praying first because I really want everything that’s done or said to glorify God,” Friend said.

Linda Michels of Zearing attended the Iowa CCI Action Fund convention and she said the “separation” that’s going on in the country will be its “undoing.”

“Peace is the answer and talking together is definitely the way to go,” Michels said.

“But that doesn’t mean we’re not angry. It’s what we do with that anger that defines us,” Espy said earlier this afternoon. “And what we do with it is we turn it into powerful, inspiring, forward-thinking action — action that takes us to higher ground.”

Sanders delivered a speech for nearly an hour and used a good share of his time to critique what he called the “horrific” health care bill Republicans intend to bring up for a vote in the Senate next week.

Conway spoke for nearly half an hour to about 50 people at a private fundraiser for the Republican Party. One of the people in the room told Radio Iowa Conway delivered a “very detailed” and “passionate” defense of the health care legislation. Neither Conway nor Sanders spoke with Iowa reporters while they were in the state today.