You are here: Home / News / Casinos in Davenport and Riverside fined for banned gambler violations 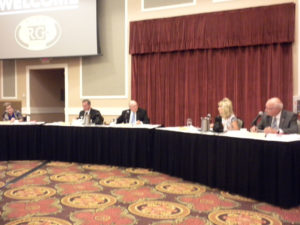 The Iowa Racing and Gaming Commission.

Two Iowa casinos were assessed penalties this week by the Iowa Racing and Gaming Commission for violations of the self-ban on gambling.

The Rhythm City Casino in Davenport was fined $3,000 after a person who had signed a self-ban was allowed to sign up for a players club account. Mo Hyder, the casino’s general manager, told the commissioners they take the violations very seriously and this one happened despite “rigorous training procedures.”

It was the first violation for the casino in the last 365 days. Hyder says the employee who was handling the situation was confused about what to do.  A commissioner asked if it was human error and Hyder replied, “Human error, correct.”

The Riverside Casino was fined $5,000 after a banned player was allowed to sign up for a players club account. General manager Dan Franz says the club cards are processed in three different places and they’ve taken steps to prevent more issues.

Franz says they’ve given additional training to all staff members and had them sign and affidavit to say that they have gone through the training. He says they’ve also instituted a new procedure that requires a check by a supervisor if questions are raised about a possible ban.

“What happens in these cases where there is a potential banned patron is a box pops up and it identifies potential situations of banned patrons and it highlights them in red.  What happened in this case is the employee clicked over it and went right by the procedure we had in place,” Franz says. “What I am asking employees to do now is that is an immediate stop and a supervisor is to come out.”