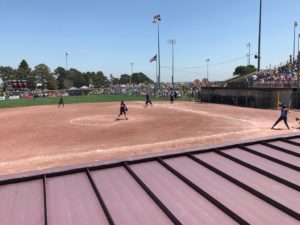 Top ranked Lansing Kee showed why it is the favorite in class 1A. The defending champion Kee Hawks tied a tournament record with 18 runs and 23 hits in an 18-1 win over Montezuma. Senior Sydney Strong had two hits and four RBI and her two run double in the top of the second opened the scoring.

Strong says a five run second gave them the momentum they needed.

In 2A, second ranked Durant broke the game open by scoring two runs in the third inning and three more in the fourth in a 9-0 win over Logan Magnolia.

“Anytime you can get a win at the state tournament, especially in the first round, is huge”, said Durant coach Steve Hopkins. “Last year we lost in 11 innings and the year before that we lost in 10 innings. To get the monkey off of our back is big.”

The Wildcats take a 31-7 record in the 2A semifinals.