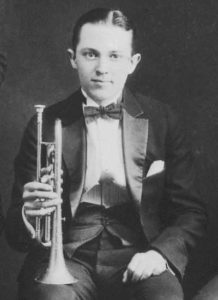 After more than four decades of history on the Davenport riverfront, the Bix Beiderbecke Jazz Festival will be held at a new location next month.

The newly-opened Rhythm City Casino Resort, in the northeast end of town, will host the 46th annual event which draws jazz lovers from around the planet.

“They have a beautiful events center. Everything is on one property. People can pull up, park, check in to the hotel and never leave if they don’t want to,” Hesse says. “We’ve gotten a very positive response. Our fans like the idea of being able to stay right where the festival is.”

Last year’s concert series was held at a Bettendorf casino and there was pushback, according to Hesse, as some “purists” felt it should be held in Davenport, Bix’s hometown.

For many years, Davenport’s LeClaire Park bandshell has been center stage for the popular festival, situated beside the Mississippi River with the illuminated Centennial Bridge in the background. Several concerts are still scheduled at LeClaire Park this year.

“There are. We continue to do Friday and Saturday nights. We’ll have three bands each night this year and they’ll be playing longer sets. That is free to the general public,” Hesse says. “We keep the tradition but we don’t have as much of the overhead. We partner with the city of Davenport. The city has actually extended its concert series to include the Bix.”

While the waterfront park can be a beautiful setting, Mother Nature doesn’t always cooperate.

“One of the reasons we downsized the park, if you will, is we had three years in a row where the weather just wreaked havoc,” Hesse says. “The one year it flooded and the other two years there were severe storms that basically wiped out the park. It was detrimental to the health of the Bix.”

The festival typically draws six- to seven-thousand people each year and Hesse says advance ticket sales are up this summer — and it’s always an international audience.

“We’ve got Bulgarians, there’s a couple from Sweden coming over, there’s a couple from Australia, there’s several people coming as a group from the UK,” Hesse says. “We consistently get visitors from nine or ten countries and then domestically, we get people from between 35 and 40 states still coming to the Quad Cities for this event.”

The lineup includes 11 bands and orchestras that are “the top of the top in the jazz world,” Hesse says, hailing both from Davenport and from as far away as New York City. The festival runs August 3rd through 5th. For details, visit www.bixsociety.org.

Beiderbecke was born in Davenport in 1903 and became a globally-renowned jazz musician in the 1920s. When he died in 1931 at age 28, he was considered one of the world’s most influential jazz soloists.