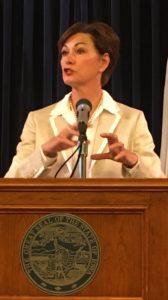 Governor Kim Reynolds today said she’s submitting policy proposals to Iowa’s congressional delegation as her fellow Republicans in the U.S. Senate consider changes in the nation’s individual insurance markets as well as the future of Medicaid.

“You cannot continue to see the cost of Medicaid go up. It is just taking over state budgets,” Reynolds said. “We have to figure out a way, reasonably and responsibly, to make that happen and still provide the most vulnerable the services that they need. We are expected to do that and we should do that.”

Reynolds isn’t revealing what her proposals may be, but Reynolds told reporters this morning there’s a need for both a “long-term solution” and a “stop gap” fix for the nearly 150,000 Iowans who got Medicaid coverage through the Affordable Care Act.

“We can’t just take it away,” Reynolds said this morning. “We have to be sure that we work with that population as we look to help them find job, provide them the support system they need…(or) a skill.”

Reynolds told reporters that congress should “relieve mandates” and provide more flexibility so states have more latitude in deciding who may enroll in Medicaid and what services are covered. Reynolds said she and other governors around the country are concerned about what congress may do on health care.

“They need to get something done in Washington, D.C.,” Reynold said. “I’m frustrated as well as I think other governors are…I’m okay with flexibility, but they can’t shift all of the costs to the states. They have to be responsible in that state-and-federal partnership.”

There are about 72,000 other Iowans who have gotten federal subsidies to buy private insurance through the Affordable Care Act “exchanges,” but only one company will offer policies on the exchange in 2018. Reynolds met with two top Trump Administration officials last week, lobbying for approval of the Iowa Insurance Commissioner’s temporary plan that may bring insurers back into Iowa’s exchange.

“Making sure that 72,000 Iowans have some type of health care coverage come January 1 of 2018, so that is my focus right now,” Reynolds said.

Ron Corbett, the Republican challenging Reynolds’ bid for a four-year term as governor, has said Reynolds and the Republican-led legislature should have come up with their own solution months ago.