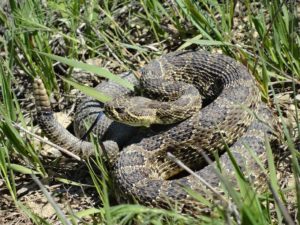 The return of two endangered rattlesnakes to Iowa might not excite most residents of the state, but environmental groups like The Nature Conservancy are applauding the discovery. Shelly Hiemer is spokesperson for the conservancy. “We’re absolutely thrilled to have them back,” Hiemer told Radio Iowa. “It means the work we’re doing to restore the prairie and to restore the peat fens is working.”

The Nature Conservancy has confirmed sightings of the two rattlesnakes this spring in the northwest and southeast corners of the state. A massasauga rattlesnake, also known as a “swamp rattler,” was spotted in the Lower Cedar Valley Preserve in Muscatine. “The massasauga has not been seen (in Iowa) in about 15 years,” Hiemer said.

There’s been heavy flooding in the region over the past two years, so it was believed the swamp rattler may’ve disappeared. “Our suspicion is that the flooding and land use changes forced it out of the habitat it normally had, so we were concerned that it wouldn’t be back at all,” Hiemer said.

The other endangered snake – a prairie rattlesnake – was found in the Broken Kettle Grassland Preserve near Sioux City. And it was found to be gravid. “Gravid, in snake lore, means pregnant,” Hiemer said. “She actually had what looked to be eight eggs in her.”

The venomous female prairie rattlesnake found near Sioux City was three feet in length. The eight eggs will likely remain in her body until mid-August to mid-September, when her young will be born live. 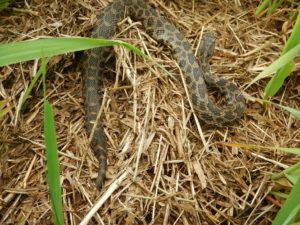 The swamp rattler discovered near Muscatine is nonvenomous and much smaller, but could grow to two-and-a-half feet in length.

While just thought of a rattlesnake might terrify many Iowans, Hiemer said they’re an important part of the Iowa ecosystem. “With these rattlesnakes returning in Iowa, that means we’re getting our ground back to what it used to be – when it did host much more biodiversity,” Hiemer said.