You are here: Home / Agriculture / Governor embarks on trade mission to China today 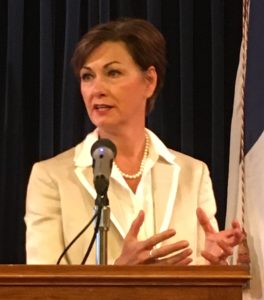 Governor Kim Reynolds is on her way to China today for a trade mission focused exclusively on promoting Iowa agriculture products.

“The trade mission’s focus is to grow our exports and to improve Iowa’s economy,” Reynolds said recently. “Right now one in five jobs are attributable to international trade and actually one in six jobs is attributable to agriculture and ag-related industries.”

The leaders of nine commodity groups have joined Reynolds in China. Craig Floss, CEO of the Iowa Corn Growers Association, is among them.

“For some of our commodities China is a developed market,” Floss said during a news conference announcing the trade mission. “For others, it’s a new market and for others we have a number of barriers that still need to be resolved, but with 20 percent of the world’s population and only 10 percent of the world’s arable land, it is absolutely essential that China have imports for a stable food supply and that makes China a critical market for all of Iowa agriculture.”

More than 1.4 billion people live in China and China’s growing middle class already is larger than the entire U.S. population.

This is the sixth time Reynolds has traveled to China on behalf of Iowa, but her first since former Governor Terry Branstad became U.S. Ambassador to China.

“I can’t underscore how important and how fortunate we are to have the relationships that we do with the leadership in China,” Reynolds said during a news conference in her statehouse office.

Reynolds said the Chinese consider the Iowa “brand” to be “reliable and safe” — whether it’s attached to a company or a commodity. In addition to the Corn Growers, representatives of the Iowa Cattlemen’s Association, Iowa Pork Producers, the Iowa Soybean Association and the Iowa Farm Bureau will be on the trip, along with commodity groups representing Iowa’s poultry industry. The group will visit Beijing, Shanghai and Xian before returning on July 28.