You are here: Home / Human Interest / Iowa Army vet to run across state for PTSD awareness 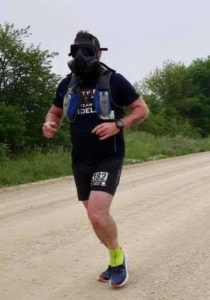 An Iowa Army Veteran is hoping to spread the word about Post-Traumatic Stress Disorder (PTSD) by running across the state of Iowa. During the run in September, Joshua Jorgensen will be wearing a military-issued gas mask.

He told KCRG-TV that the mask represents the struggle many veterans face on a daily basis. “It says I’m struggling with those same things, but I’m getting up every day and I’m doing this. I’m putting myself in an even bigger struggle, because I know there’s an end and I can make it through it so, so can you,” Jorgensen said.

Jorgenson is part of Team Fidelis, a nationwide group working to end the epidemic of veteran suicide.

Jorgensen, who lives in Adel, just west of Des Moines, has been training for the past six months for the September run, a total of 330 miles. He is hoping to complete the run in ten days or less, running over 30 miles a day — starting in Council Bluffs and ending in Burlington.