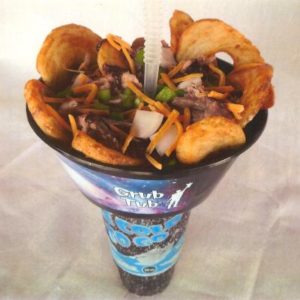 Fair spokesperson Mindy Williamson says one of the finalists is called Pork Almighty. “There’s a mountain of shredded pork, with queso cheese, twisty fries on the bottom, and then onions, green peppers, and BBQ sauce,” Williamson said. “We were told it’s about three pounds of food once you get that all put together.” The Pork Almighty will be sold with a drink for $12 at the Steer N Stein.

Pork is also featured in another finalist — Iowa’s Big Pork Leg. “It’s similar to a turkey leg, is what it looks like to me, but it’s actually a pork shank. They have these specially made with Caribbean seasoning,” Williamson said. “They’re $9, but it’s definitely shareable.” That item will be sold at a booth just east of the Administration Building on the fairgrounds.

Fairgoers who sample the three new food items will cast their vote for their favorite. The 2017 Iowa State Fair in Des Moines is scheduled for August 10-20.