You are here: Home / Sports / Sean Welsh goes public with his battle with depression 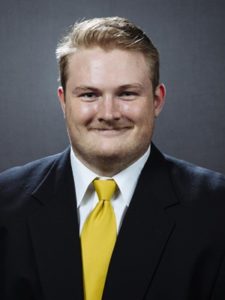 Iowa offensive lineman Sean Welsh has won more than his share of battles on the field and enters his senior season on the watch list for the Outland Trophy. His biggest battle has come away the field. Welsh announced he is battling depression and says he first began experience symptoms in 2014.

“The week before spring break in 2015 the wheels really came off”, said Welsh. “I forgot about classes, missed a midterm and was barely surviving workouts. I remember a stretch where I didn’t leave my room for three days.”

He left the team during spring practice in 2015 and even considered giving up football. It was during his time away he was diagnosed with depression. Welsh takes medication but says it remains a constant battle.

Welsh says he is going public in part to help other college students who may be going through the same thing.

“With me it was really a matter of pride. I was too proud to admit I needed to seek help”, added Welsh. “If someone like me can have the platform to talk about it hopefully it can help someone else who is dealing with those kinds of issues.”

The native of Ohio started all 12 games for the Hawkeyes last season and was named second team All-Big Ten.