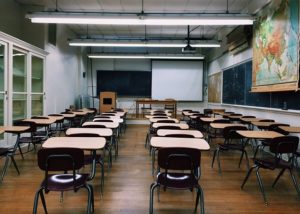 Caulking around fluorescent lights could be adding to classroom PCB levels.

Children may be exposed to airborne PCBs in schools that were built between 1950 and the mid-1970s. PCBs were banned in 1979.

Keri Hornbuckle, a UI professor of civil and environmental engineering, says they expected to find more airborne PCBs outside of schools.

Hornbuckle says, “We were surprised to find that many schools have indoor concentrations of PCBs that is much higher than outside, suggesting that there are direct sources of these chemicals inside of schools.”

Hornbuckle says likely sources include old caulking around windows and fluorescent light fixtures. Replacing those materials can reduce the concentration of PCBs in a school.

She says it’s long been known PCBs are in some foods and that’s how scientists expect children take in most of those chemicals.

“Our study showed that inhalation of PCBs in their schoolrooms could also be another large source of PCBs,” she says. “Our estimation is that it could be similar to that that they get from their food.”

The report says PCB levels found so far in Iowa schools are below what’s considered dangerous by the Environmental Protection Agency, but Hornbuckle says they’re high enough to be concerning.