You are here: Home / Agriculture / Iowan Sam Clovis nominated to be USDA undersecretary 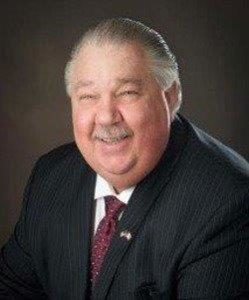 President Trump has nominated an Iowan who was a top policy advisor on Trump’s 2016 presidential campaign to serve as the USDA Undersecretary for research, education and economics. Sam Clovis, formerly of Hinton, Iowa, has been working in the USDA since Trump took office, serving as a liason to the White House.

“This may be the last rodeo I ever have. I can’t believe I’ve had this experience,” Clovis said a year ago during an appearance in Iowa. “But I will tell you this: I can’t imagine anything more important than what I’m doing right now because it’s about the country.”

His nomination to be the top science advisor in the USDA has sparked controversy, as Clovis has said he’s skeptical of climate science.

“I have looked at the science and I have enough of a science background to know when I’m being boofed and I think a lot of what we see is ‘junk science’, so I’m a skeptic,” Clovis said during a 2014 interview on Iowa Public Radio.

“What we see about a lot of this…is really about income redistribution from rich nations that are industrialized to nations that are not and it comes down to this false premise…that we ought to consume based on population rather than on the strength of our economy,” Clovis said. “If we have 20 percent of the world GDP, it wouldn’t be a surprise to anyone that we consume 20 percent of the energy of the world.”

Clovis finished second in the June 2014 Republican Primary for U.S. Senate and then he ran as the Republican Party’s nominee for state treasurer in the 2014 General Election. Clovis worked on Rick Perry’s presidential campaign, but after Perry dropped out of the race Clovis joined the Trump team in August of 2015. Clovis helped edit Trump’s most recent book as well.

Clovis is a US Air Force veteran who was a Morningside College economics professor and talk show host on KSCJ Radio in Sioux City before he entered politics.