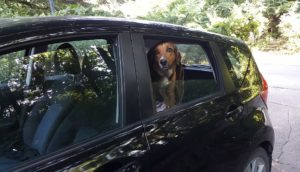 Police and animal welfare officials across the state are reporting an uptick in calls about dogs being left in hot vehicles. Josh Colvin, with the Animal Rescue League of Iowa, says dogs should just be left at home when temperatures rise to the level they’re at this week.

“I know we keep harping on this throughout the summer months, but this is going to be a hot spell and we just have to remind people,” Colvin said. “We’re talking heat indexes of 110…a spell like this, it’s probably best for dogs to be in the air conditioning and keep them safe.”

In Des Moines on Wednesday, police and ARL staff were called four times to shopping center parking lots to rescue dogs that were left alone in cars. Temperatures in the capital city climbed into the upper 90s. “Luckily, we found the owners and we weren’t having to impound those animals,” Colvin said. “We had to talk it through with the owners, you can’t do this because it could be tragic.” All four dogs survived.

It takes a very short period of time for a dog to suffer heat stress or even stroke on days such as this – when temperatures across Iowa are in the 90s to around 100. “We always advocate for us to be with our pets. They’re part of our family, we get that. But, as being part of the family, people just have to realize when it’s too hot, it’s too hot. A very short time in a vehicle, just running into a store, could be tragic for your dog,” Colvin said. “We just can’t emphasize that enough. You know, short-nosed dogs…just taking them for a walk in this weather could be tragic. They could be in distress very quickly.”

Three dogs died of heat exposure after they were found locked in a vehicle on July 10 outside of a dog show in Ottumwa.