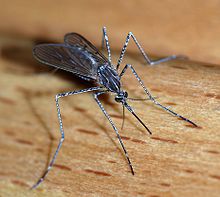 For the first time this year, an Iowan is testing positive for West Nile virus. Deputy state epidemiologist Dr. Ann Garvey says the case should serve as a reminder for all of us.

“That was in a middle-aged man in Ida County,” Dr. Garvey says. “He was not hospitalized and is recovering, so that’s really good news.”

“Use repellant when outdoors and make sure that you’re following that label carefully,” Garvey says. “The percentage of the repellant dictates how long it will be effective. Make sure you’re checking the label and that you’re reapplying appropriately.”

Avoid being outside at dusk and dawn when mosquitoes are most active and if you’ll be out, wear long-sleeved shirts, pants, shoes and socks when possible.

“Other things you can do are making sure the screens are intact in your house to keep mosquitoes outdoors where we want them to be, not indoors with you,” Garvey says. “Dump out standing water. It’s so hot and dry this week, it’s hard to think about standing water around our houses but even things like bird baths. Make sure you change that water regularly.”

The virus first appeared in Iowa in 2002 and it’s since been found in every county, either in humans, horses or birds.

“About eight out of ten people who are infected with West Nile virus won’t have any symptoms,” Garvey says. “One in five will have symptoms and in many people that’s fever, headaches, body aches. Less than one-percent will have very serious symptoms that are sometimes fatal.”

Last year, 37 human cases of West Nile virus were reported to the Iowa Department of Public Health, including one case that resulted in death.