A now-topless barn in Winneshiek County.

Powerful thunderstorms with winds up to 75-miles an hour blasted across northeast Iowa late Wednesday afternoon. One person is reported hurt.

The Allamakee County Sheriff’s Department says 67-year-old Dennis Deal of Waukon was in his barn during chores when high winds blew the barn over. He was taken by ambulance to Veterans Memorial Hospital in Waukon. Deal’s condition is not known at this time. 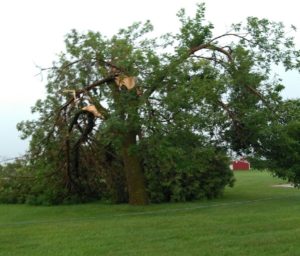 There’s scattered damage to homes, crops, trees and power lines across the region. Winneshiek County emergency management coordinator Sean Snyder says the southern part of that county took the brunt of the storm.

“Festina, Ossian, Castalia and Spillville were hit very hard last night,” Snyder says. “Many trees are down. Power lines are down.”

A tornado was spotted in Winneshiek County near Fort Atkinson. Snyder says crews from the National Weather Service office in La Crosse, Wisconsin, will be in the county today to assess the damage.

There’s also damage in the town of McGregor, including to that town’s City Hall.