You are here: Home / Fires/Accidents/Disasters / McGregor tornado damage may be worse than first thought 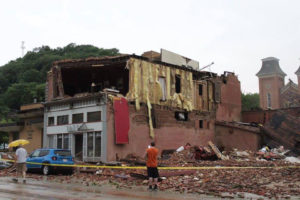 The mayor of the northeast Iowa town of McGregor, struck by a tornado Wednesday night, says damage to the city’s downtown is likely even worse than what many people initially thought.

Harold Brooks says it’s still unclear how many buildings on Main Street were destroyed. “They’re finding out that there are hardly any businesses that are not damaged (in) some way or another,” Brooks said. The National Weather Service rated the tornado as an EF1, with wind speeds of up to 110 miles an hour.

Roads remain blocked into McGregor as crews work to restore power to the entire town. “The cleanup is going very well – a lot of support, a lot of good turnout,” Brooks said. Some McGregor residents reported this morning that their power has been restored.

Brooks said he hasn’t seen a storm of this magnitude in the 50 years he’s lived in McGregor. Despite all the damage, there have been no reports of serious injuries.

A state disaster proclamation has been issued for Clayton County, where McGregor is located, as well nearby Allamakee, Fayette and Winneshiek counties.