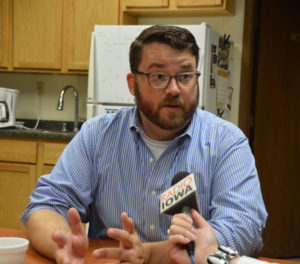 The Iowa Democratic Party’s new chairman is promising to “fix” the party’s message and infrastructure after election losses in 2014 and 2016.

“Our party wants get to work, but we’re only going to be able to get to work if our party is working well,” Price said in a speech to the Iowa Democratic Party’s state central committee. “We’ve lost the trust of the very people we’re trying to help. Our message is fractured and we are focused too much on antiquated ideas and old thoughts and not enough on finding solutions.”

Price, who is 36 years old, replaces Derek Eadon who resigned as the party’s leader in late June for health reasons. Price was the Iowa Democratic Party’s executive director for the 2014 election cycle and he’s worked in the past for Hillary Clinton, Tom Vilsack and Chet Culver.

“I want to shake up this party and make sure that it is as strong as it possibly can be,” Price told reporters after his election. “It is clear that our party has had challenges over the last few cycles and I’ve seen them firsthand. I know what they are and so I want to utilize those experiences to make sure that we are doing something different and that are doing things differently heading into 2018.”

Price seemed to channel his inner Trump as he gave a four-minute speech to the Democrats on the party’s state central committee who elected him.

“We can get to work winning and that winning’s going to start on August 8th,” Price said, “and we can continue to win all the way through Election Day.”

August 8th is the date of the special election in the Fairfield area for a seat in the Iowa House.

Price started his new job as party chairman immediately. Price, who thanked his husband for being supportive of his decision to seek the party leadership post, is the first openly gay chairman of either of the state’s major political parties.

“The chances that we have seen on LGBTQ rights since I was a high schooler in the late 1990s to where we are today has just been monumental,” Price told reporters early this afternoon. “There’s a lot more work, though, that needs to be done. The Iowa Democratic Party has always stood for that sort of change.”

Price beat two other Democrats in the balloting for the chairmanship, though no vote tally was released. Julie Stauch, one of the unsuccessful candidates for the party leadership slot, said the party is “at a crossroads.”

“It is not enough to care, to know people. We need people who can innovate and move us forward,” Staunch said. “…Right now, where the Iowa Democratic Party is today, being cautious is the biggest risk you’ll ever take.”

Bob Krause, the other unsuccessful candidate, argued the chair needs to provide “good cover” for the Democrats who are running for office in 2018.

AUDIO of speeches from Krause, Price and Stauch

Price, the new party chair, is a native of Durant, Iowa. Earlier this month, he left a job working for one of the six Democrats who’s running for governor. Price told reporters he has promised all the candidates that he and the party will be neutral in the primary race.