You are here: Home / News / Bike riders come from many states to travel across Iowa 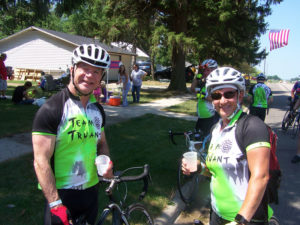 Many of the thousands of bicycle riders who are making their way across Iowa on this week’s annual ride are from other states and other countries.

Pat Baldwin lives near Tulsa, Oklahoma, and this marks his tenth RAGBRAI. Baldwin says he enjoys taking in sweeping views of the countryside, seeing old friends and making new ones.

“People from Iowa are very hospitable, very community-oriented,” Baldwin says. “I tell everybody who says, ‘Why do you want to ride Iowa?’ I say, it’s the most beautiful farms, the most scenic places I’ve been to. Iowa is America. When I think of America, small town, big town, whatever, I think of Iowa.”

Cindy Deitz is traveling with Baldwin on her first RAGBRAI, after only biking for about a year. Deitz says she’s looking forward to having Iowa pork chops, sweet corn and home-baked pie, and she’s also making new friends.

“Just the people. Pat’s talked about how friendly everybody is and how welcoming everybody is,” Deitz says. “I’ve seen it already and I just can’t wait to go town to town and see more people, meet more people and all the hospitality.” In reflecting on his first RAGBRAI, Baldwin recalls being surprised by the hilly topography of Iowa.

“I’d only really been a rider for two or three weeks,” Baldwin says. “I’d got asked at the last minute and the first day was about 78 miles, a lot of hills, I thought it was going to kill me, but I fell in love with it and every chance I get to come back here is great.”

Today the riders are pedaling the 72 miles from Spencer to Algona. Tomorrow’s destination is Clear Lake.