You are here: Home / Sports / Schooley leads No. 9 Iowa City Regina in 2A 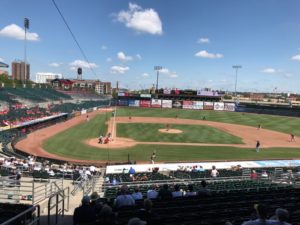 A late season run continues for Iowa City Regina. Junior pitcher Ryne Schooley tossed a four-hitter and struck out seven as the ninth ranked Regals blanked number two Treynor 5-0 in a class 2A quarterfinal round game.

Regina has now won 14 of its last 15 games heading into Thursday’s semifinal round.

“Honestly, I think it is the defense”, said Schooley. “We play really solid defense. That last inning I was getting a little nervous and they turned that double play. That really solidified the game.”

The Regals broke through in the bottom of the second inning by taking advantage of a pair of Treynor miscues to score two runs. That was more than enough for Schooley, who improved his season record to 7-1.

“We came out of the short side of the scoreboard but we finished 32-5 and set a school record for wins”, said Treynor coach Bob Mantell. “We did not play poorly we just got beat. Baseball can be a cruel game but it just wasn’t our day, today. It was theirs.”