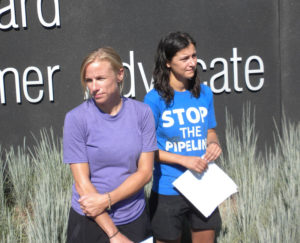 Two women admitted today to multiple acts of vandalism along the Dakota Access Pipeline in Iowa and other states.

Twenty-seven-year-old Ruby Montoya was joined by 35-year-old Jessica Reznicek outside the Iowa Utilities Board office where they read from a statement.

“After having explored and exhausted all avenues of process, including attending public commentary hearings, gathering signatures for valid requests for Environmental Impact Statements, participating in Civil Disobedience, hunger strikes, marches and rallies, boycotts and encampments, we saw the clear deficiencies of our government to hear the people’s demands,” Montoya says.

Reznicek says they felt they had to take action. “The courts and public officials allowed these corporations to steal permissions from landowners and brutalize the land, water, and people,” she says. “Our conclusion is that the system is broken and it is up to us as a individuals to take peaceful action and remedy it.” Reznicek then began to detail the actions she says they took to try and stop the pipeline.

Jessica Reznicek and Ruby Montoya are stopped by State Troopers after pulling letters off the IUB sign.

“On election night (2016), we began our peaceful direct action campaign to a Dakota Access construction site and burned at least five pieces of heavy machinery in Buena Vista County, Iowa. Details regarding this action are attached. This was information which was not shared with the public,” according to Reznicek. She says “our action wasn’t much, but we at least stopped construction for a day at that particular site.”

Reznicek says they researched the best way to try and pierce the pipeline and continued their action in March. “We began in Mahaska County, Iowa, using oxy-acetylene cutting torches to pierce through exposed, empty steel valves, successfully delaying completion of the pipeline for weeks,”

Reznicek says. Montoya says they were pleased with the way destroying the valves stopped the progress of the pipeline. 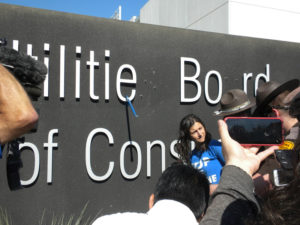 Ruby Montoya is arrested by a State Trooper.

“After the success of this peaceful action, we began to use this tactic up and down the pipeline, throughout Iowa and a part of South Dakota, moving from valve to valve until running out of supplies, and continuing to stop the completion of this project,” Montoya says. The two say the damage to the pipeline valves was kept quiet by the pipeline company and they then moved back to arson, using tires and gasoline-soaked rags to burned multiple valve sites, their electrical units, as well as additional heavy equipment located throughout Iowa.

They attempted to pierce a valve located in Wapello County in early May and discovered the pipeline was already working.

“It was at this time we discovered oil was flowing through the pipe. This was beyond disheartening to us, as well as to the nation at large,” Reznicek says. Reznicek says the company said the delays in the pipeline were caused by what were called “ditch depressions” in the ground. 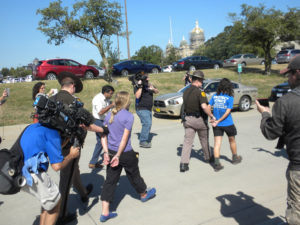 Jessica Reznicek and Ruby Montoy are led away in handcuffs.

“It is because of these lies we choose to come out publicly to set the record straight and be open about these peaceful and viable tactics against corporate atrocities,” Reznicek says.

State Troopers watched as the two women read their statement. When they finished, they pulled a hammer and crowbar from their backpacks and began to tear letters off the Iowa Utilities Board sign behind them. Troopers quickly moved in and arrested them. Sergeant Steve Lawrence talked about their arrest.

He says they have been charged with fourth-degree criminial mischief for the vandalism to the sign. Lawerence does not know what other charges they may face for their statements admitting the vandalism to the pipeline. The two women say they will represent themselves in their trial with the help of a lawyer.