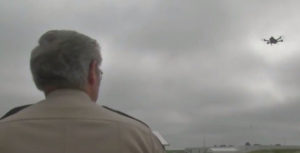 Sheriff Fisher watches one of his department’s drones.

A law enforcement agency in northeast Iowa has added drones to its workforce.

“I’m always looking for tools to better assist my agency and my deputies,” Fisher said. The drones will help deputies cover large areas of Fayette County that aren’t easily accessible by vehicle or even by foot.

“This may help us scout those hidden valleys and so forth,” Fisher said. Because the county has such a diverse terrain, Fisher believes the drone will be particularly useful for search and rescue missions. Volga State Park is just one area the sheriff’s office has had issues in the past.

“In 2001, we had probably 11 missing persons in that 12 month period. Nine of them were in that Volga Lake project,” Fisher said. The drones will cut down search times, according to Fisher. They could also be used to collect evidence.

Fisher and his chief deputy are both licensed to fly drones, while several deputies are pursuing Remote Pilot Certificates.