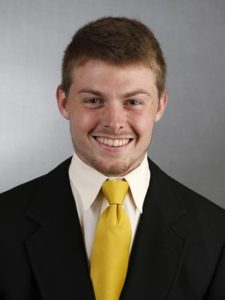 Iowa receiver Matt VandeBerg says the biggest changes under new Hawkeye offensive coordinator Brian Ferentz have been in the passing game. The son of Iowa head coach Kirk Ferentz took over the offense following the retirement of Greg Davis and the Hawkeyes released a two-deep this week that includes two tight ends in the starting lineup.

And that new passing game will be directed by a brand new starter at quarterback. Sophomore Nathan Stanley and Junior Tyler Wiegers will continue their competition in fall camp.

“I am pulling for the guy who helps us win football games and it doesn’t matter to me who it is.”

A healthy VandeBerg is crucial for an Iowa receiving corps short on numbers and experience. The native of South Dakota suffered a broken bone in his foot following the Big Ten opener and missed the remainder of the season. He suffered the same injury in spring practice.