You are here: Home / News / Party chair concerned with how new GOP voters may react in 2018 (AUDIO) 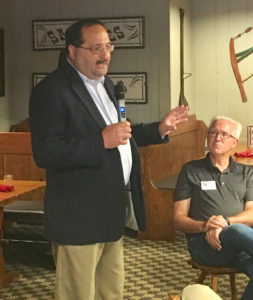 The Iowa Republican Party’s chairman today said he’s “worried” some of the new voters who President Trump attracted to the GOP in 2016 may not vote in 2018 because of inaction in congress.

“Bottom line is, with this health care thing, I am concerned,” Iowa GOP chairman Jeff Kaufmann said this morning at the Westside Conservative Breakfast Club in Urbandale.

Kaufmann told the group that party “insiders” understand the nuances of the legislative process and are willing to give Iowa Republicans in congress the benefit of the doubt when it comes to fulfilling promises to “build the wall” along the southern border and repeal ObamaCare.

“And you understand that there’s only so much we can do to affect the congressional delegation in Kentucky, versus our five-member delegation here,” Kaufmann said.

Kentucky Senator Rand Paul has been a leading critic of the health care reform efforts the U.S. Senate’s GOP leader has been advancing. The Iowa GOP’s chairman mentioned other GOP senators from Maine, Alaska, Nevada and Arizona who’ve also balked at some of the proposals. Kaufmann warned the “climate” for Republican candidates in the 2018 election will be affected, because of how the new “Trump voters” in the GOP may react.

“I’m worried about them because, in general, what they know is Republicans have control and Republicans aren’t doing what they promised even though individual congresspeople and senators are doing what they have promised,” Kaufmann said. “…The people that are less informed about the process, yes, I worry because it contributes to a climate that: ‘We’ve given you what you’ve asked for and you haven’t delivered.'”

Kaufmann said he’s trying to “set the example” of being a staunch supporter of President Trump and he hopes the message reaches the “new Trump voters” in Iowa who aren’t following the hour-by-hour details of the congressional debate.

“There’s a lot of things that a Republican chair is supposed to do. I can’t think of any that are any more important than supporting your Republican president,” Kaufman said. “…I will not waiver…I’m going to be aggressive and I’m not going to flinch when he needs some support and some help.”

According to Kaufmann, Republicans in Washington, D.C. “should be able to move the bar” on health care after Tuesday’s crucial Senate vote that allowed the debate to begin.