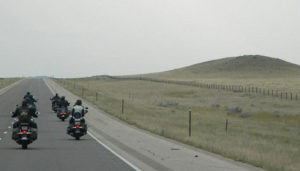 While there’s several thousand bicyclists pedaling across northern Iowa this week, Iowans can expect to see a big influx in motorcycle traffic in the next few weeks as the big Sturgis Festival is coming up.

Twenty-five motorcyclists have died on Iowa’s roads so far this year and Rose White, spokeswoman for AAA, is offering a reminder. “With three to four months remaining in the riding season, we’re urging all motorists to stay alert and check twice for motorcycles before changing lanes, turning, backing up, or pulling into traffic,” White says. “Of course, avoid all distractions that take your mind and eyes off of the roadway.”

Strengthening the state’s texting-while-driving law may help to prevent crashes, as well. Iowa’s new primary texting law became effective July 1st. White reminds motorists to never tailgate a motorcyclist. Give them extra space as they may need to make sudden lane changes to avoid potholes or road debris. She says motorcyclists need to be cautious and courteous, too.

“Riders should always consider wearing clothing that makes them stand out in traffic, such as a reflective vest,” White says. “We also encourage riders to take a basic rider course if they’re a new driver or an experienced rider course if they have several years of experience. Both provide excellent defensive driving skills.” Even more two-wheelers will be on the road soon.

“We’re reminding all motorists, with the upcoming Sturgis Rally in South Dakota being held August 4th through the 13th, we do anticipate we’ll see an increase in motorcycle traffic during those two weeks, the week before and following the Sturgis Rally,” White says. “Keep in mind, remember to share the road safely with all motorists, including motorcyclists.”

The 25 motorcycle deaths on Iowa roads this year is tracking much lower than last year at this time, as 60 motorcyclists were killed in Iowa during all of 2016.