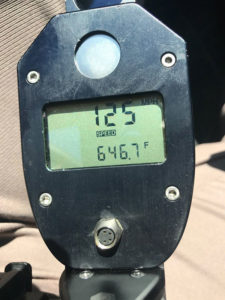 The State Patrol this week nabbed another “extreme speeder” on an Iowa interstate.

A Trooper clocked a driver Tuesday at 125 miles an hour at one of the busiest interchanges in the state – just east of Des Moines. A photo posted by the Patrol to Facebook included a note that the vehicle was driving “at a whopping 60 mph above the posted speed limit.”