Members of an Iowa trade delegation to China are expressing optimism that markets for trade of several products will be reopened with that country.

One of the big items is ethanol and the byproduct from the production of ethanol known as dried distillers grains or DDG’s.

Iowa Corn Growers Association president Kurt Hora, spoke about the issue during a conference call from the country.  “To be able to gain market access for those two products would be huge here in China. We know what a difference they’ve made to our livestock and our environment there in Iowa, and we know we can help them make a difference here,” Hora says.

He says they are also hoping to get broader acceptance of biotech corn. “We’ve been able to utilize biotech traits and looking for approval of the rest of the traits that’s helped us clean up our water and clean up our environment there in Iowa,” Hora says. “And we hope that they will embrace those traits and accept them so we can use them worldwide and get them over here.” 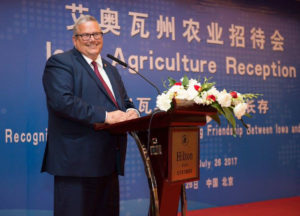 Iowa Ag Secretary Bill Northey says China used to be a major importer of DDG’s, and Iowa as the nation’s leader in ethanol production has felt the loss of that market. “Losing that market for the DDG’s has impacted the profitability of our plants. Ethanol itself needs to come in here this market as well. There’s additional taxes recently on ethanol — so that is extremely limited now,” Northey.

“The experience I think has been very mutual and very warm and friendly,” Irwin says. “And so for us in the turkey industry to have that opportunity to someday hopefully sell back into China a safe quality turkey product to meet their growing need for protein is very exciting for us.” It is the first trip for Irwin to China. She says they discussed importing turkeys for use in homes and also for commercial use.

“We’re seeing some very strong interest in fast food restaurants in China to be adding some turkey products,” Irwin explains. “So I am leaving here very optimistic and just very exciting for everything that we’ve been seeing here. It’s been an exceptionally wonderful experience.” Discussions are also underway on other poultry products such as chickens and eggs.

Kevin Stiles of the Iowa Egg Council says there are talks of exporting chickens from both countries. “I think we are in agreement that there are opportunities for U.S.D.A. to closely evaluate that opportunity for them to ship cooked poultry into the United States,” Stiles says. “And I think they realize that there are also opportunities for regionalization so that we can resume (shipping) poultry and poultry products into China.”

The regionalization he mentioned involves Chinese officials inspecting individual areas of the United States that were free from avian influenza and could import products. Stiles says they hope to eventually be able to export eggs to China.

“Several people we talked to thought that that was an opportunity. We’ve got some protocol that needs to be put in place,” Stiles says. He says they see that more of a long-term opportunity three to five years down the road. Stiles says the Chinese officials have been pleased with the added biosecurity since the bird flu outbreak and that has made the export of poultry more possible.

“We are getting close, I think they are appreciative of all that we do to guard against further outbreaks of avian influenza and limit any outbreaks that might occur,” Stiles says. “And so there’s a renewed confidence in our biosecurity efforts in Iowa and the entire United States.” Governor Kim Reynolds led the delegation to China.